‘Rise UP’ photography campaign at UCO – behind the wizards’ curtain

Some of you guys may have seen this if you live or work around the North West of England. We’ve been working alongside the marketing team at the University Campus Oldham and created a Hero image that shows a graduate student being lifted by his time at UCO, enhanced and supported to ‘Rise Up’ and achieve the extraordinary.

We needed a suitable location that could be used in either a portrait or landscape orientation. I chose a composition that would allow several uses of the image. These days the photographer has to be mindful of most of the major social media ratios as the images will ultimately find their way on to them, so building in adaptability is crucial to allow use in multiple marketing channels.

I started out by framing out the shot via a tripod, this was important as I knew that tricky Photoshop work and layering was going to play a part in this creation. Making sure the frames were in registration, I organised our volunteers to move throughout the scene mindful of the spot that would occupy our hero student. I intentionally used a slow shutter speed to slightly blur the motion of the walking people, this was useful for two reasons; it focuses the viewer’s attention to anything sharp and provides anonymity for staff being used on the shoot.

You can see from the thumbnails that I captured a variety of images, we’d pick the best ones for the final comp. We moved into the studio to photograph the Rise UP student. I crafted the light around the subject, working hard to create a lighting scheme that sat well when included in the final comp and yielded enough texture to pick the subject out.

Layered and adjusted in Photoshop the final images combines all the elements of the location, studio, and graphics together to enhance the campaign. Check out the UCO website to see the images in place whilst the campaign runs its course. The screenshot above provided just in case they change the website.

Need advice? Get in touch!

Working with us is easy

What our clients say about us… 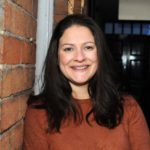 We have used Greg for several photoshoots over the years and he never disappoints. Always working within our agreed budget and delivering quality shots for PR use, Greg is a pleasure to work with. Highly recommended.

a consummate professional, with a friendly and personable edge

We offer free advice for your project